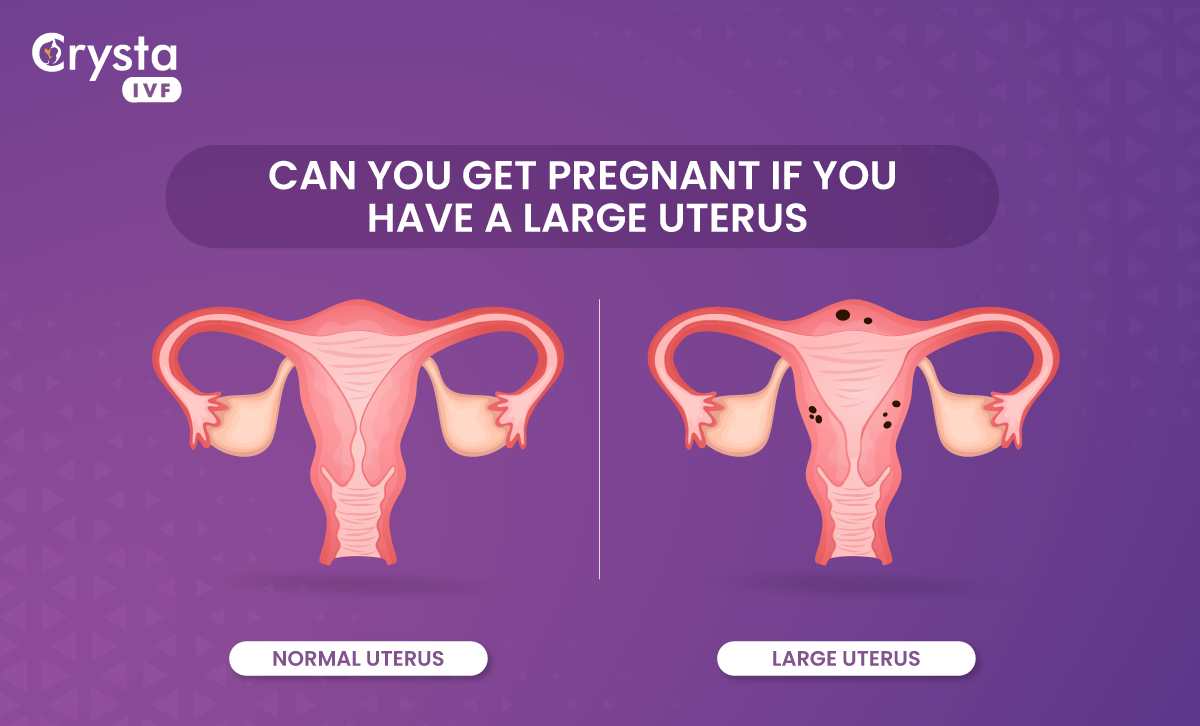 A bulky uterus is a uterus larger than normal. It can be caused by a number of medical conditions, including fibroids, endometriosis, and pelvic inflammatory disease (PID).

For most women, a bulky uterus does not cause any symptoms and is only discovered during an ultrasound. However, in some cases, it can cause painful periods, irregular bleeding, and even infertility.

Problems with the uterus account for 3% to 5% of infertility cases. Therefore, it’s essential to understand the causes & conditions that might affect your ability to conceive. Keep reading about the bulk uterus, its causes, and treatments so you can make an informed decision.

But first, let’s understand the essential component of female fertility and pregnancy, i.e., the Uterus.

The uterus plays a crucial role in fertility and pregnancy. This small organ, located in the female reproductive system, is responsible for nurturing the developing fetus during pregnancy.

It has several vital functions, including providing a safe and secure environment for the fetus to grow, supplying nutrients to the fetus, and producing hormones such as estrogen and progesterone that help regulate the growth and development of the fetus.

Without a uterus, it would be impossible for a woman to become pregnant or carry a baby to term. The uterus is truly an amazing organ, and its importance to fertility and pregnancy cannot be overstated.

What is a Bulky Uterus?

A bulky uterus is a condition of an enlarged uterus where it grows bigger in size than normal, which can lead to infertility in some cases. Generally, the normal dimension of the uterus ranges from 8 cm x 5cm x 4cm (around d 3 to 4 inches by 2.5 inches). Women with the condition have uterus bigger in size than it is supposed to be.

In some cases, a bulky uterus can also cause discomfort & fertility issues. If a bulky uterus is causing infertility, there are a few different treatments available.

It is most often caused by endometrial hyperplasia, a condition in which the endometrium (the lining of the uterus) becomes too thick. Other causes of a bulky uterus include fibroids, polyps, and adenomyosis. In some cases, the cause of a bulky uterus is unknown.

Fibroids are tumors that grow in or on the uterus or womb. They may impact reproductive health and pregnancy chances in several ways, including heavy menstrual periods and pain during intercourse.

Some fibroids are small in size and may not cause any noticeable symptoms, but some might grow to the extent that it makes the uterus look bigger.

The condition is noncancerous and has symptoms similar to fibroids, such as prolonged menstrual bleeding & pelvic pain.

PCOS is the imbalance of reproductive hormones where the ovaries produce an excess of male hormones called androgens. PCOS can also make your uterus grow bigger, along with an abnormal menstruation cycle and clumps of fluid-filled sacs called cysts. PCOS is among the common reasons for infertility among women of reproductive age.

Specific cancer of reproductive organs such as the endometrium, uterus, and other pelvic regions can cause tumors and enlarge the size of the uterus.

It is referred to as a stage before reaching complete menopause, and the stage also marks the end of the reproductive years. Changes in hormone levels after menopause can sometimes cause the uterus to enlarge.

Signs of bulky uterus condition depend on the cause of it. Often the condition is asymptomatic, and in other cases, you may likely experience –

Does Bulky Uterus Cause Infertility?

A bulky uterus, which is an enlarged uterus, can be a cause of infertility in some women. The enlarged uterus can prevent fertilized eggs from implanting in the uterus or cause an embryo to be expelled prematurely.

It is also possible for a bulky uterus to interfere with the delivery of sperm or egg cells, which can make it harder for a couple to conceive naturally. In some cases, the enlarged uterus can also interfere with the functioning of the fallopian tubes, making it more difficult for an egg to travel from the ovaries to the uterus.

In addition, fertility treatments such as IVF or IUI may be less successful if the uterus is enlarged. Uterine enlargement can also cause complications during pregnancy, such as an increased risk of miscarriage or preterm labor.

A bulky uterus can put pressure on other organs, such as the bladder, and cause pain and discomfort. If you believe that a bulky uterus may be causing your infertility, it’s important to talk to your doctor so they can determine the best course of treatment.

Several treatment options are available if a woman has a bulky uterus. However, the treatment depends on the cause of the condition. Oftentimes a woman with a bulky uterus doesn’t necessarily require treatment.

In cases of infertility, in vitro fertilization (IVF) may be recommended to help the woman become pregnant. IVF is a form of assisted reproductive technology that stimulates ovaries using medications to retrieve mature eggs.

The eggs are then fertilized with the partner’s sperm in a laboratory. The resulting embryo is then transferred to the uterus for implantation.

It is essential to have routine pelvic exams with a gynecologist. This is vital to identify the early issues that may get worsen. While in many cases, the reasons behind bulky uterus aren’t severe and require no or very little treatment.

But in some cases, the condition can negatively affect a woman’s lifestyle and cause difficulty in conceiving.

Ultimately, it is important to speak with an experienced fertility doctor at the best IVF center in Delhi at Crysta IVF if you have any concerns about a bulky uterus or infertility. They can help you understand your condition and work with you to find the best treatment for your situation.

For the past six years, Ritish Sharma has been writing healthcare-related articles for multiple websites with the sole purpose of answering the queries of the readers precisely. She possesses a vast knowledge of the need for preventive health checkups and different measures to adopt in your routine for maintaining a healthy lifestyle. Her passion lies in reading the latest research, studies, and revelations in science and technology. Not only does she enhance her knowledge base regularly, but she keeps sharing the same with her readers to keep them close to clinical and medical realities.

What Happens If Endometriosis Is Left Untreated